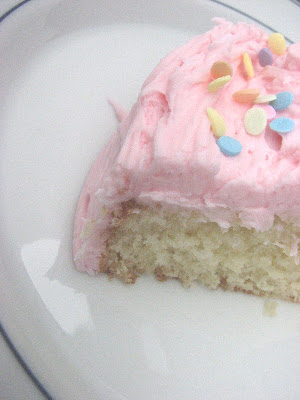 For as long as I've owned my Magnolia Bakery cookbook, I had never made the most basic & popular recipe in there. They claim that their vanilla/vanilla cupcake is the most requested flavor of cake in their bakery. I needed a layer cake for a friend's birthday & I really didn't feel like searching for the "perfect" recipe. I didn't look at all really. This book was sitting on my table and I flipped to the vanilla cake page and decided I was going to make this cake. It's a very basic method & recipe for white cake. It's fairly "white" but not completely. There are too many whole eggs in the recipe to make it super white. I added about double the vanilla to the recipe & a splash of almond extract. When I iced the cake, I brushed the layers with a simple syrup to make sure they were moist. (I actually just pulled out my large bottle of vanilla latte syrup from Costco & used that, but it's basically a simple syrup with a little vanilla flavoring). I made my triple layer cake and then had a 6 inch single layer left over for testing purposes. I hate to give away a cake and not know how it tasted. Quality control, ya know? So I took photos of the large cake after I iced it but cut into the 6 inch one for photos of the innards. I like this cake alot but many things could go wrong with it and the main one being, it would be easy to bake it too long. I watched it very closely while in the oven and removed it before a toothpick came out completely crumb free. The edges could get over browned easily also. I used cake strips on my pans to prevent that - but the sides were still pretty brown. The bottom could also get over brown easily. I placed the pans on a cookie sheet and raised the rack in the oven but they bottoms were still plenty brown. But overall, this is a wonderful white cake. It's not fluffy but not dense either. It's in between. I think it's needs the additional extract and the flour for sure needs to be sifted. 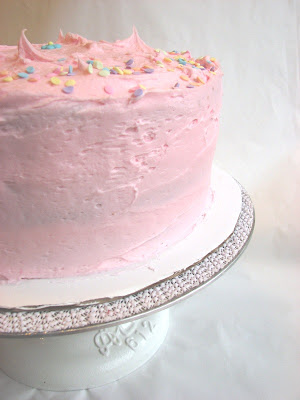 I made a double recipe to get my 9 inch triple layer & a single 6 inch layer. 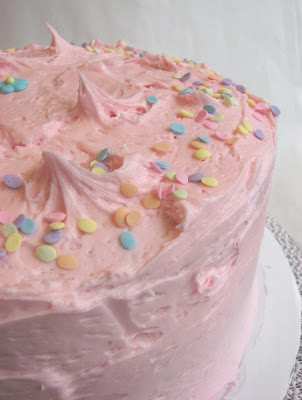 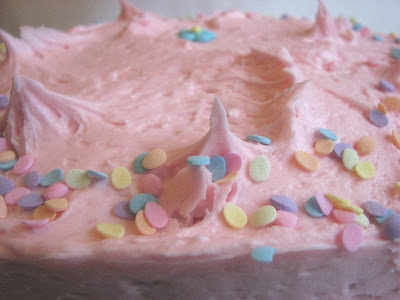 My pink icing is a basic American butter cream with added meringue powder for stability. 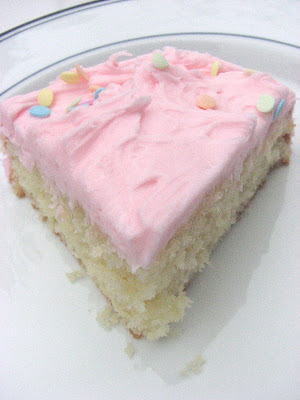 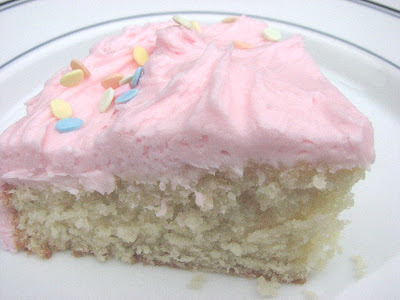 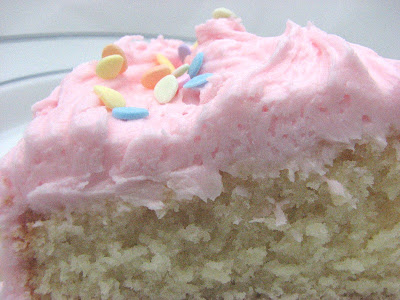 i have always wanted to make their cake, but never have! thanks for the tips!

Wow, this is my kind of cake, all pink and girly!

That is an excellent looking cake! Love the pink color! I have tried to make layer cakes sooooo many times and I usually don't have enough frosting to cover the cake and have it look good, its like a curse.

I also live near Seattle!

I found you via Ms. Humble's website. This cake looks amazing! I love the look of the buttercream. YUM!

this cake looks wonderful. i can't wait to try it, especially with that beautiful pink frosting.

When visiting Columbus Circle location I noticed the cake decorator brushing and poking holes in the top of all the cakes before frosting. Asked her what she was doing and replied that she was basting the cake with a simple vanilla syrup before frosting. I asked her if they do this to all of their cakes and she replied yes. Have never seen this step as a direction in any of their cookbooks and recipes – felt a bit bamboozled since I buy the cookbook in order to make the recipe exactly as they do – yet they left out this essential step. Now you know!

No, they do not mention the simple syrup method in their cookbook but as you can see in my post, I added that step on my own. I don't often brush my cakes with simple syrup but white cakes made from scratch have the tendency to be dry sometimes so the simple syrup helps. If you DO bake your cake too long then a soaking with simple syrup can REALLY help with the dryness. It's adds a bit of flavor and a bit of moisture. You don't want to use too much syrup though because then you run the risk of having a soggy or gummy cake. And be sure to poke holes in the cake before brushing - small holes, like with a wooden skewer or toothpick, not big like a chopstick (a chopstick is good for making holes for poke cakes!).

Would you be considering exchanging links? free online casino slots 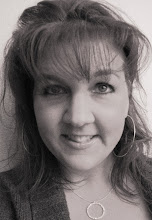